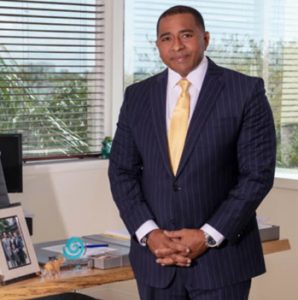 Michael Garcia was born in Salinas, Puerto Rico, and came to the mainland as a young child. He grew up in Brooklyn, New York, and moved to Broward County in 2003.

Michael has a successful Construction, Commercial litigation and Government Affairs Practice located in Fort Lauderdale, Florida. Prior to establishing his own firm, Michael honed his litigation and advocacy skills at two prominent law firms here in South Florida, Arnstein & Lehr, LLP., and Vernis & Bowling, PA. While at Arnstein & Lehr, LLP, Michael served as the Assistant City Attorney for the Town of Southwest Ranches and City of Lauderdale Lakes. Michael has also work as Staff Counsel for Geico and has also been a Professor at Broward College Teaching Construction Law.

In addition to the work as the Chairperson of The Hispanic Vote, Michael volunteers his time with the American Lung Association (Turquoise Takeover) as an Ambassador regarding the Lung Force awareness campaign, and with the Cooper City Optimist, as a Coach. Michael has served on several Boards and Committees such as Broward County School Board Supplier Diversity Committee and the City of Plantation Education Board.